The laborious, but important process of choosing your wedding bands does not end when you find the perfect style, size and design of ring you both adore. After the important first step of picking out the actual ring, you are finally ready to personalize the rings by engraving a special message to each other inside the ring. But things, are not like they used to be in terms of engraving, now, you have options. Nowadays, most reputable jewelers offer not only traditional etched engraving, but also offer newer laser engraving. But, what is the difference? Here’s a look at key differences of the types of engraving available. 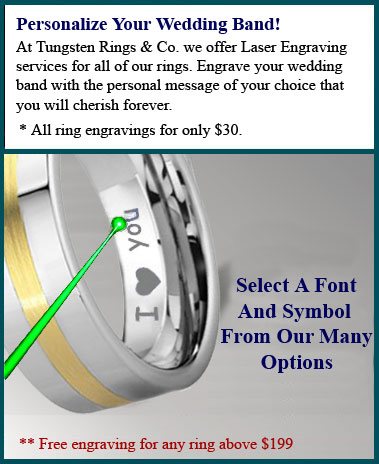 Traditional etched engraving is the way engraving has been done forever, which is by etching or carving a personal message on the ring’s surface. This is the type of engraving you would see on a trophy or plaque and is a fairly simple technique. It typically is performed using a needle and literally carving into the surface. Some jewelers state that tungsten carbide jewelry cannot be engraved, because it is too hard. This is simply not true. Etched graving can be performed on tungsten wedding bands if a diamond tipped needle is used. Diamonds are the hardest substance on earth, which means they can scratch anything.

Laser engraving is more technologically advanced. Many jewelers who maintain on top of technological advances are very familiar with laser engraving and offer that service to their customers. Despite the fact that laser engraving has been around for a long time, it has only recently been used for jewelry. For engraving, a laser essentially burns your message on the surface of a ring and works on all types of surfaces including tungsten. One great advantage to laser engraving is that you have many fonts to choose from.

Some think a certain type of engraving is easier to read. Truth is, they are both very legible. But, laser engraving tends to be slightly easier to read because your message is essentially burned into the ring, making it a little darker. But, a traditional engraving is a little deeper, and depth makes it easy to read as well.

So now that you know a little about engravings, it’s likely you are now wondering which is more popular. In reality, it is your decision which to use. Both are effective. Traditionally, those who get softer metal rings, like platinum and gold, tend to go with an etched engraving. Those who tend to get alternative metals, such as tungsten carbide jewelry tend to go for a laser engraving. Regardless of your choice of engraving style, the message engraved will be meaningful and memorable.

About the Author: Zack Mason

Before joining Tungsten Rings & Co., Zack Mason has worked in the jewelry industry for several years. Mason performed work on engraving, resizing, and jewelry working for several types of precious metals such as gold, platinum and even alternative metals such as palladium. Prior to working in the jewelry industry, Mason was a staff reporter for a local newspaper where he developed and tuned his writing skills. There are few jewelers in the industry with this type of experience. Read More