While you may hear the term Tungsten on its own very often, it is important to understand that tungsten cannot be found on its own. Tungsten is always found combined with other elements, such as carbon or iron. In fact, the sources from where tungsten is commonly extracted lend their name to the identification of tungsten.

One of the minerals where tungsten is commonly extracted from is called Wolframite. This term is used prevalently in some European countries and even lends its name to tungsten’s chemical symbol of W.

“Tungsten” itself derives its name from a Swedish word used to describe the mineral now known as scheelite, which is a mineral from which Tungsten is extracted. Scheelite used to be referred to as “tung” which means “heavy” and “sten,” which means stone. Tungsten was a “heavy stone.” This could be, as has been mentioned before, due to tungsten’s high density. 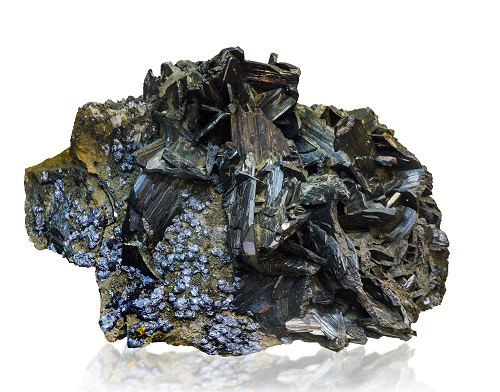 Like everything in our world, Tungsten is made up of millions of microscopic particles known as atoms. Atoms can only be seen with specialized instruments and cannot be seen by the naked eye.

Atoms, which derive their name from the Greek word “atomos” (loosely translated as “indivisible”), consist of neutrons, electrons and protons. Every element is made up atoms, and the atomic composition (the numbers of electrons protons and neutrons in each element determine the elements ability to form a compound with any other element). Every atom contains all of the properties of its element.

Tungsten contains exactly 74 protons in its nuclear makeup. This number of protons is unique to Tungsten as no other element shares this amount of protons. For this reason, tungsten has an atomic number or proton number of 74. An atom will have the same amount of electrons as it does protons. The 74 electrons in the Tungsten atom revolve around the dense nucleus of the atom, which is composed of protons and neutrons. The role of the electron in the atom is to balance the positive charge of the proton. This balance of electrons and protons makes the atom electrically neutral.

Tungsten is a very dense metal, and still among the strongest of all metals, it can also be pretty brittle. In fact, it is possible to cut a piece of tungsten with something as common as a hacksaw. This is due to the amazing qualities that Tungsten possesses.

With the exception of Carbon, Tungsten has the highest melting point of all elements. Melting means when the element begins to turn into liquid. As an example of understanding its melting point, when metals such as Iron are at their boiling point, Tungsten is barely beginning to melt. This occurs at 6,152 degrees Fahrenheit, or 3,410 degrees Celsius. Tungsten’s melting point does not come until 10.220 degrees Fahrenheit or 5,660 degrees Celsius. Even at these extremely high temperatures, tungsten maintains its strength and does not even expand as much as other metals do when they are facing such high temperatures.

About the Author: Zack Mason

Before joining Tungsten Rings & Co., Zack Mason has worked in the jewelry industry for several years. Mason performed work on engraving, resizing, and jewelry working for several types of precious metals such as gold, platinum and even alternative metals such as palladium. Prior to working in the jewelry industry, Mason was a staff reporter for a local newspaper where he developed and tuned his writing skills. There are few jewelers in the industry with this type of experience. Read More